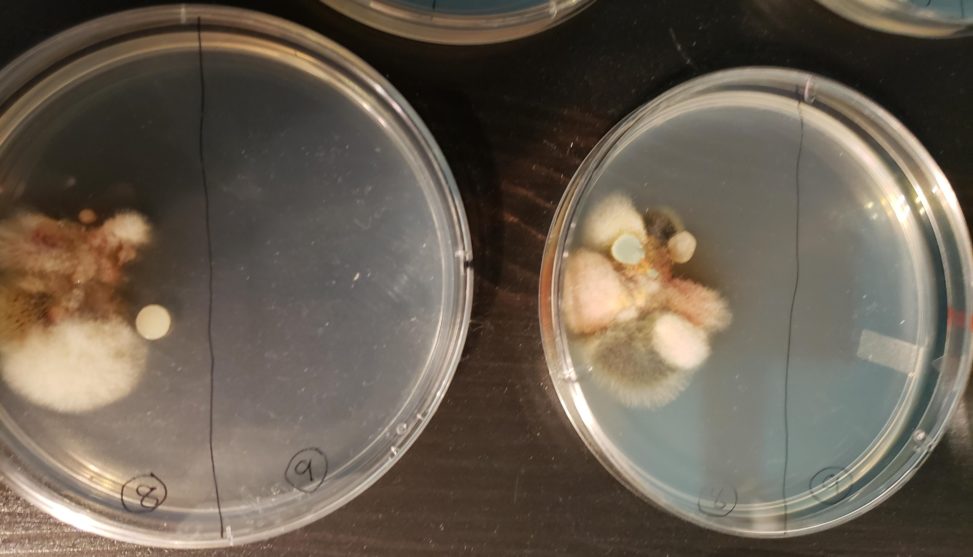 Swabbing the Dust off the Air Vent/Bathroom Tile Grout Dust

-On the left side, the media is CMA and on the right side, the media is PDA
-In the plates , on the left we have a swab of dust from the top of the air vent located in the hallway of my house (labelled 8) and in the right side of the plates I have a swab of a tile’s grout in the main bathroom in my house (labelled 9)
-Firstly, for the portion of the slide labelled 9 no fungi has grown yet in both medias. This could be due to the fact that the samples were taken late Thursday of last week not allowing enough time to grow or that the bathroom tile was actually very clean. Therefore, for (9), there are no differences as of yet.
Secondly, for (8), the differences are hard to tell since both are very similar in size and almost color. The PDA plate contains more varieties of color, making the multiple fungi easier to count. It is clear there are different types of fungi with the color variety. The CMA plate has some different colors, different fungi, but not as much as the PDA plate. The CMA plate also contains larger growths of the same fungi whereas the PDA plate contains small to medium growths of many fungi. The overall growth of both media is very similar, so I find that insignificant.
-I believe in this situation, while comparing only 8 since 9 has nothing grown, that the PDA plate is better to discover the many types of fungi that can possibly grow from a tissue. However, the CMA would be better to isolate fungi from since there are larger portions of the same fungi.